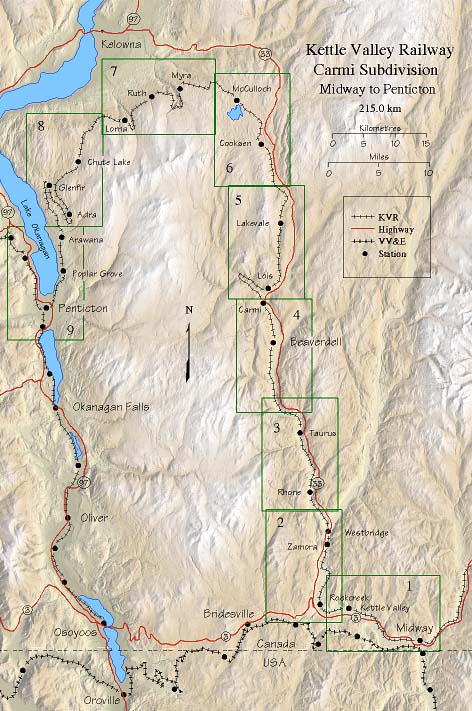 The route from Midway "Mile 0' west is coming together. The railbed can be ridden from behind the Midway Museum to Ingram Bridge with one highway crossing just west of Midway and a detour through the mill yard. At Ingram Bridge you have to pass under the bridge and follow a path up to Bubar Rd. which loops around some farms (approx. 2km) and back onto the railroad grade. The Midway Museum is a great place to get trail updates and vehicles can be left there. For those who wish to camp in Midway, the Village has a campground on the river with washrooms and firewood for $10.00 a night (better deals for unaccompanied cyclists - especially if it rains). Showers are available for $2.00 across the road from the campground. Motel and Bed and Breakfast accommodation are also available. (June 2000, Steve Stewart.)

39.9 Paul Lautard's War Memorial in Rhone has become a rest stop for cyclists. Paul has built a beautiful shelter with hammock inside, an out house and picnic table on the site and a bicycle railing for leaning heavily ladened pannier bicycles against. Hopefully every one will have a chance to meet Paul and share in some of the history of the area and some of that great tasting water he carries down from his house. Paul has also informed me that Rhone was named after the Rhone Valley by a family that had come from the Rhone Valley and settled in the area, and not after the Rhone River as I have stated in the book. Paul was born in Carmi in 1922. .(Sept, 1998)

CLOSED
The Tamarack Lodge is open, we cater to the cyclists as well as work crews needing lodging. We supply rooms, bag lunches ect, we are fully lisenced, and children are allowed. We serve breakfast, lunch and dinner. Our new # is 250-484-5348. Please if you could clear the old ads and replace it with this info and # it would be a great help and would end the confusion that we are closed as i say we are fully open, with a new phone so people can contact us. With our beaverdell hotel gone we need to keep the tourism going for our little community. Thanks Dan, my e-mai is monique_tanner@hotmail.ca. Again thank you.

86.4 Wilkinson Creek Detour - There appears to be a road just pior to the 4x4 road that leads up from Wilkinson Creek Forest Service Road to the KVR at Lois. Chris Gilfoyle wrote me to say that a number of cyclists are getting lost mistaking this road for the 4x4 road to the rail-bed. This road runs out in about 1.5 km and does not connect to the KVR. The right road is about 500m from Highway 33 and is a grassy 4x4 road that forks about 150 metres from the start and both forks connect to the KVR. (Nov 6, 1997)

121.8 McCulloch Lake Resort (9995 McCulloch Road, Kelowna, B.C. V1P 1K3)
Since the fires in Myra Canyon McCulloch Lake Resort has undergone ownership changes and does not offer services. The new owners are looking into suppling services at a latter date fors cyclists.
Camping is available at Hydraulic Lake Forestry Campground which is expanding and making cycle into only sites along the lake shore. Expected completion of sites later in 2008. ( km 121.4)

Ten of the Sixteen Wooden Trestles In Myra Canyon were destroyed in the Okanagan Mountain Fire in August of 2003. The two steel bridges had the wooden decks burnt off. All of the trestles have been rebuilt.Below is a record of the damage.

The Myra Canyon Trestle Society numbered the 18 trestles in Myra Canyon from west to east.
Those in Red were destroyed in the fire.

183.1 - 184.3 Adra Tunnel Bypass Trail - There is a dirt 4x4 road which runs over Adra tunnel which is not indicated on map 8 (page 66). This road has been mistaken for the tunnel bypass trail when coming up from Penticton, causing a few people to get lost. The road crosses the KVR approximately 100 metres from the lower tunnel entrance, where as the trail can be found about 550 metres from the tunnel. See map.

208.0 Hillside Estate Winery A great place to stop for lunch and sample the wines.

If you know of any trail problems sent me a note.